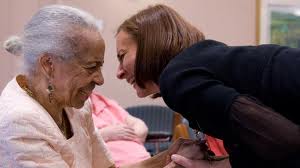 While camping out in chapter 5 of the Book of Matthew, a couple of things came to my mind while pondering verses 33-37…What does it mean to not break an oath or fulfill a vow to the Lord?

As a caretaker of those with Dementia and Alzheimer’s Disease, you come to realize that during the progression of this plaguing disease, you become more and more their navigator in life; they count on you and trust you. I have taken care of many clients with this mind crippling disease and have never broken my vow to give them the best of care. I have always been honest with the client and their family. I do my best to fulfill my vow.

What does it mean to fulfill a vow to the Lord and how do we do this?

In Matthew 5:33-37 Jesus was referring to the ceremonies of which Jews took oaths. He even went on to say that it was considered an undesirable procedure because it was all about trying to pull the wool over other people’s eyes. They were making oaths that were designed to impress; indicating that the person swearing on the oath had power over the things that the oath mentioned. They were keeping promises or commitments that they were apparently not going to keep by taking a silly oath. Jesus said,  Do not take an oath by your head, because you are not able to make one hair white or black. vs36…He didn’t want any of this foolery to touch us.

I am in no way a perfect person. I tend to make mistakes every day. I consciously  set out to do things starting on the right foot but sometimes land on the wrong foot. My intentions are good though. I do my best to not break my commitments. I have been taking care of the most wonderful man with Alzheimer’s. He is no longer in my care but now in a memory support facility. Although I will be moving on, I will keep my oath to him to see him almost daily. I will read him the poems we used to say. I will sing with him like I used to and I will allow him to read the obituaries like he used. I will do all of this because I took a vow to help him in his disease. This also is my oath to the Lord!

Jesus took an oath for each one of us as he hung on that old rugged cross. He promised us eternal life with Him in heaven if we believe. He did not attempt to ever pull the wool over our eyes.

This is the promise which He Himself made to us: eternal life. 1John 2:25 NASB

Have you broken a vow?